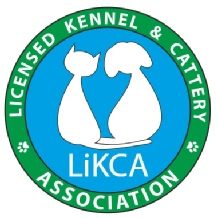 LIKCA - the Licensed Kennel and Cattery Association is a voluntary organisation and the only one to focus solely on licensed kennel and cattery businesses. Its core purpose is to protect the livelihoods and interests of these small businesses, typically family owned and operated, from the growth of unregulated and unlicensed operators on the one hand and increasing legislation on the other.

2016 News - We are currently looking a strategies for dealing with and counteracting the claims made by unlicensed Homeboarders and Petsitters.

The VAT registration threshold was increased, in the Budget, in line with inflation to £83,000 from 1 April 2016.

Updated by Su Carlin on behalf of LIKCA on8th April 2016

The LIKCA directors have made individual submissions on the DEFRA Licensing Consultation and encouraged members to make individual submissions. The reason for this is that each submission will count as a voice in its own right. If we had made one LIKCA submission it would only have counted as one response no matter how many kennels and catteries’s views it represented.

PetAdmin, the kennels and catteries software programme people, confirmed that they continuing their sponsorship of our organisation.

LIKCA announced the departure of  founder members Mrs Pam Gee and Mr. Peter Reed who both tendered their resignations in January.

Anyone interested in joining LIKCA or playing an active role should contact by us email at  likcaorg@gmail.com.

6th April 2016 – was the date by which all of the 8.5 million dogs in England, Scotland and Wales need, by law,  to be microchipped their details registered on one of the authorised databases, such as Petlog.

Listening to the news on deadline day it was announced that approx 1.4 million dogs were still not microchipped. Of the 7.1 million dogs that are already chipped , it is thought that approx 3 million – just under half - of the UK’s dog population do not have the correct owner’s information details registered on the microchip databases.

The main objective of compulsory microchipping dogs is to enable lost or stray dogs to be reunited with their owners. The authorities also seem to believe that this will stop puppy farming and enable them to trace the owners of dangerous and disruptive dogs.

Looking on the internet and in the press,  there are various interpretations of the law, so let’s have a look at the truth.